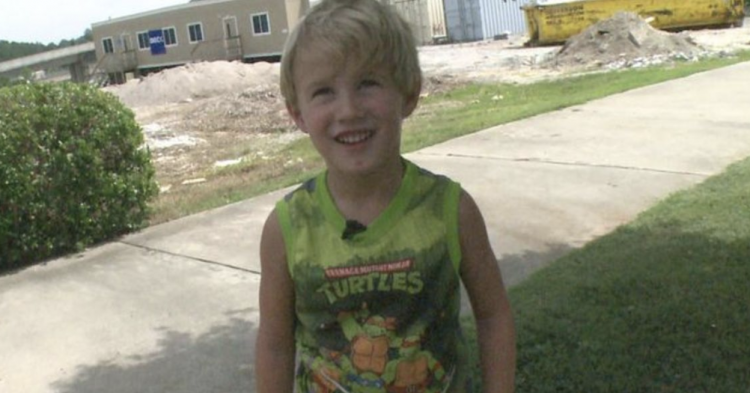 Lewis Roberts was with his family when they entered a restaurant in the Atlanta, Georgia, area. As a four-year-old boy, Lewis was very excited to be eating at a restaurant because it’s not an experience he gets to enjoy every day. However, the restaurant, Tavern at Phipps Plaza, refused to serve Lewis because the boy was allegedly violating the establishment’s strict dress code policy, so the staff at the restaurant asked the four-year-old boy to leave.

The restaurant claims to abide by a strict “Gentleman’s Dress Code.” Lewis, who was wearing a green Teenage Mutant Ninja Turtle tank top when he entered the restaurant, was not dressed like a gentleman according to the standards of Tavern at Phipps Plaza. Although the hostess told the family that the boy’s sleeveless shirt would not be allowed in the restaurant, the family did not think much of it. However, the hostess then called over the shift manager, who promptly kicked Lewis and his family to the curb.

The family was shocked that Lewis would be subjected to a “gentleman” policy. However, the manager insisted that “gentlemen of all ages” need to abide by the rules or else eat at a different establishment in the Atlanta area.

The family tried to reason with the restaurant staff because they did not see anything wrong with Lewis’s sleeveless shirt. However, the restaurant refused to let him inside, so the family had no choice but to find another place to eat.

The boy’s aunt, who was present for the ordeal, stated, “If we would have thought for a minute that he was inappropriately dressed, we would have gone to a different restaurant to save the embarrassment.”

The incident promptly went viral and sent shockwaves through the Atlanta community. WXIA-TV confronted the restaurant owners, asking them for a comment, but the owners did not respond with anything other than silence. Later that week, a company’s spokeswoman claimed that the hostess and manager had made a mistake.

“[The] rule does not apply for children and ladies — for gentleman only,” stated company spokeswoman Amber Stewart. “It was an embarrassing misunderstanding on our part. [The manager who asked the family to leave is] a manager in training who had a gross misunderstanding of our policy.”

The company did try to fix their mistake by reaching out to Lewis’s family. Fortunately, the family was receptive to the restaurant’s apology. The company made it clear that they made a mistake by enforcing the dress code on the four-year-old boy and wanted to make it up to the family by inviting them to come back.

The family was more than happy to accept the restaurant’s apology and hold no hard feelings against the establishment. While they could have been bitter and refused to patronize the restaurant again, the family decided to put the incident into the past and frequent the restaurant again. This time Lewis would be accepted as he was and not expected to follow the “Gentleman’s Dress Code” due to his young age.

What do you think about this restaurant’s dress code?