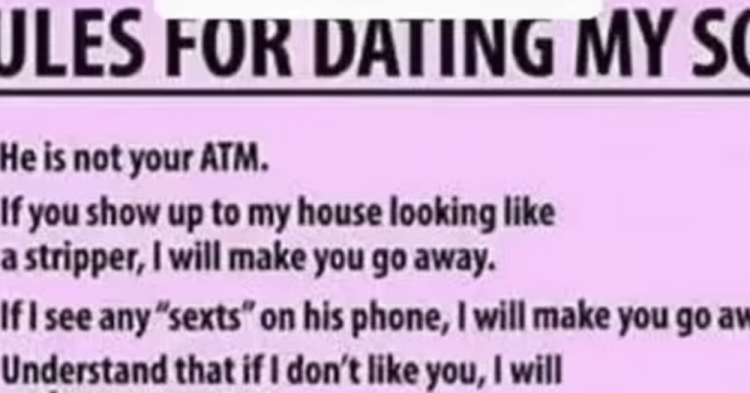 Things were going great between eighteen-year-old Emma and her boyfriend. Then, Emma saw something that her boyfriend’s mother has posted on social media. The post included a list of rules that Emma’s boyfriend’s mother expected her to follow while dating her son. Although mom posted her demands on her Instagram, the teenage girlfriend snapped a screenshot of them and then uploaded the demands to her TikTok profile, where they are now going viral across numerous social media platforms.

The list of rules from the boyfriend’s mother includes not “looking like a stripper” when coming to the home as well as not taking money from him like he is an “ATM.” 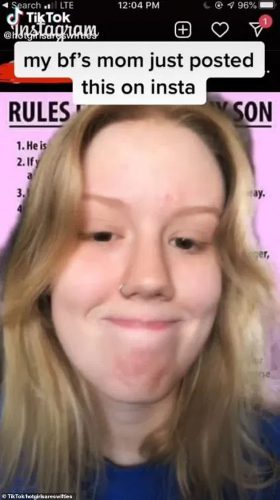 Emma posts content to the Chinese-created social media app under her profile, hotgirlsareswifties. Emma lives in Louisiana. She was absolutely stunned after seeing that her boyfriend’s mom had posted a series of ten rules that she expected anyone dating her son to follow to the letter.

The mother, who was very overprotective of her son, claimed that she knew how to make any girl “go away” if they violated any of the rules concerning dating her son.

“He is not your ATM,” read the mother’s first rule. Her second rule was, “If you show up to my house looking like a stripper, I will make you go away.”

The third, fourth, and fifth rule were the following: “If I see any ‘sexts’ on his phone, I will make you go away.”

Mom wrote, “He’s a ‘Mama’s Boy.’ Unless you have a ring on your finger, your opinion of that does not matter.” 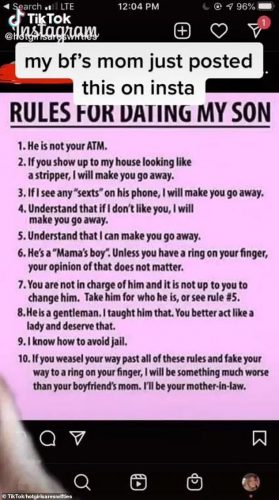 “You are not in charge of him, and it is not up to you to change him. Take him for who he is, or see rule number five,” which explains how mom can make her son’s girlfriend disappear.

“He is a gentleman,” mom writes. “I taught him that. You better act like a lady and deserve that.”

“I know how to avoid jail,” mom states as rule number nine. Rule ten reads, “If you weasel your way past all of these rules and fake your way to a ring on your finger, I will be something much worse than your boyfriend’s mom. I will be your mother-in-law.”

Emma was stunned to see that her boyfriend’s mother had posted these rules to her social media page. However, the eighteen-year-old from Louisiana was able to take the shock in stride and post a video response on TikTok exposing the craziness. Emma’s video clip has amassed more than 130,000 likes since it was uploaded to TikTok, and others have shared their sympathy with the young woman.

“Break up now. It will never get better,” one person suggested.

“Moms like this are ridiculous. My bf’s family adores me. I’m so sorry you have to deal with this.”

Another person wrote, “Oh, she will def wear white at your wedding.”

What do you think about this mother’s dating rules?