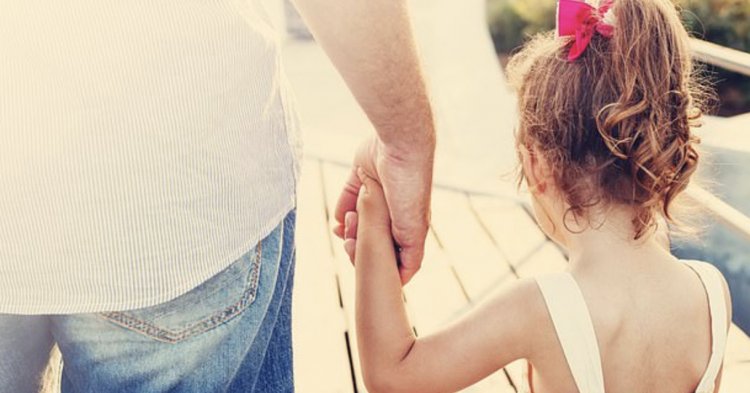 A stepmom has turned into an overnight viral sensation after confessing that she wanted her fiancé to “get rid” of his four-year-old daughter. The man, who lost his first wife during the birth of the little girl, is engaged to marry the “evil” stepmother, who is currently seven-months-pregnant with their first child together. The woman was seeking advice from the Instagram life coach, TalksWithMee before her outrageous comment was shared to the CNTRL+ALT+DLT that Relationship Facebook group.

The subject of the post was, “I want my fiancé to get rid of his four-year-old daughter.” 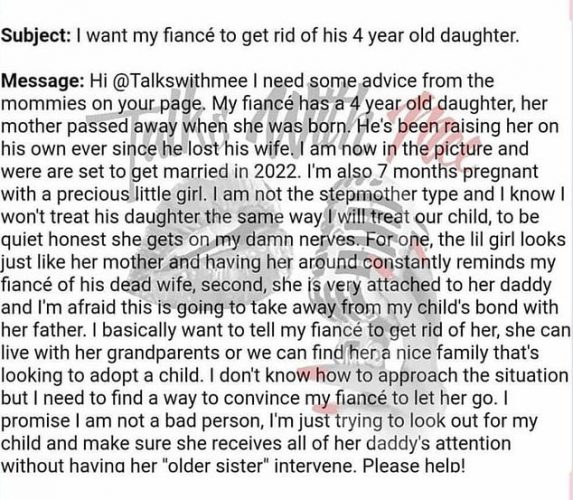 The mom wrote, “I need some advice from the mommies on your page. My fiancé has a four-year-old daughter. Her mother passed away when she was born. He’s been raising her on his own ever since he lost his wife. I am now in the picture, and we are set to get married in 2022. I’m also seven-months-pregnant with a precious little girl.

“I am not the stepmother type, and I know I won’t treat his daughter the same way I will treat our child. To be quite honest, she gets on my damn nerves. For one, the little girl looks just like her mother, and having her around constantly reminds my fiancé of his dead wife. Second, she is very attached to her daddy, and I’m afraid this is going to take away from my child’s bond with her father. I basically want to tell my fiancé to get rid of her. She can live with her grandparents, or we can find her a nice family that’s looking to adopt a child. I don’t know how to approach the situation, but I need to find a way to convince my fiancé to let her go.

“I promise I am not a bad person. I’m just trying to look out for my child and make sure she receives all of her daddy’s attention without having her ‘older sister’ intervene. Please help!”

Although the woman assured readers that she was “not a bad person,” people were quick to call her an “evil” and “vile” woman for what she wanted to do to the man’s four-year-old girl.

“I can understand maybe being concerned with bonding the same with each child. But WTF!? That’s gross, and if it bothers her this much, she shouldn’t be with the man.”

Other readers were equally disgusted with the mom.

“Gross. If you don’t like other people’s kids, DON’T DATE PEOPLE WITH KIDS,” one writer suggested.

“This is so disgusting. I hope he found out about this before they got married,” another wrote.

“This made me literally sick to read. That poor little girl deserves so much more than that hag,” another wrote.

“What a f****** waste of space this woman is. Imagine being this selfish and evil,” said one.

“Evil! Shame on dad for not seeing the red flags and leaving her. I hope he protects his daughter.”