Suicidal Dad Drives Off Cliff With Twin Daughters In Car, But They All Survived Thanks To 1 Hero 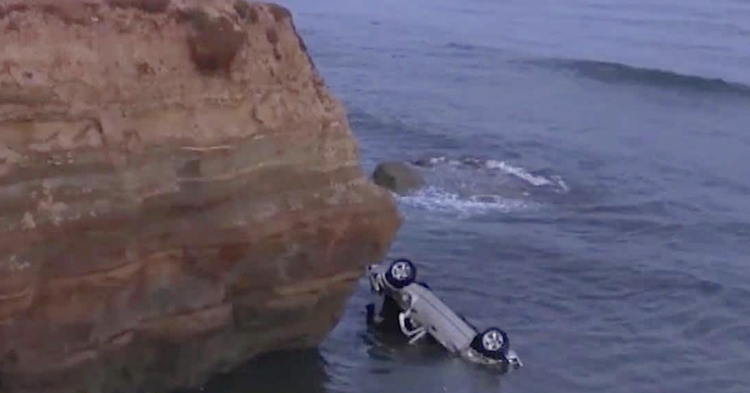 Depression can be dangerous. If it goes untreated, it can lead to thoughts of suicide and self-harm. One father was overwhelmed with his symptoms of depression and decided that he wanted to end his life. However, he didn’t just want to kill himself. He got in a car with his twin daughters and then drove off a cliff into the water – but was thankfully rescued by a hero who happened to be in the right place at the right time to help out quickly before anyone was fatally hurt.

Police officer Jonathan Wiese received a call early in the morning when the 47-year-old father took his two-year-old twin girls from their mother without permission. The man was reportedly suicidal and might be in possession of a firearm. Officer Wiese, who works for the San Diego Police Department, immediately got to work tracking down the man so he could help keep all three of the people in the car safe.

Then the worst thing happened. The twins’ mother started receiving alarming calls and texts from the father. The messages hinted at how he was nearing the end of his life and that his daughters might be joining him.

Authorities rushed to get to the father before he did something unthinkable. One of the possible things they feared the man would try to do was drive his car off the Coronado Bridge.

With the help of emergency dispatchers, they were able to track the man’s phone to Sunset Cliff. However, his car was no longer on the cliff. The middle-aged father had driven his car off the cliff and had landed in the water. The car was slowly sinking down to the bottom of the water after falling fifty feet from the top of the cliff.

The father and his twin girls were not wearing seatbelts when he drove them off the cliff in an attempt to kill all three of them. They were seated on his lap when the car lifted off the ground and plummeted into the water several dozen feet below.

Thankfully, Officer Wiese was on the case. As a K-9 handler, he had some extra resources at his disposal. Among one of the first cops to arrive at the cliff, he needed to act fast if he was going to save the little girls.

Thinking outside of the box, Wiese took his dog leash and used it to repel the fifty feet down the side of Sunset Cliffs. With his heroic effort, he was able to safely reach the girls and save them from the deathtrap that risked drowning them in the coastal water of the Pacific Ocean.

“I looped it under my armpits and around my chest. Some other officers had arrived, so I threw the other end of it to them and told them, ‘hang on. I’m going to go over the edge.’”

Thankfully, Officer Weise could see that the girls were not hurt after being driven off the cliff. And the father was alive as well. By repelling off the cliff, he was able to prove to the world how much of a hero he is.