Teacher Doesn’t Know How To Handle Violent Student. Then A Kid From The Back Stands Up 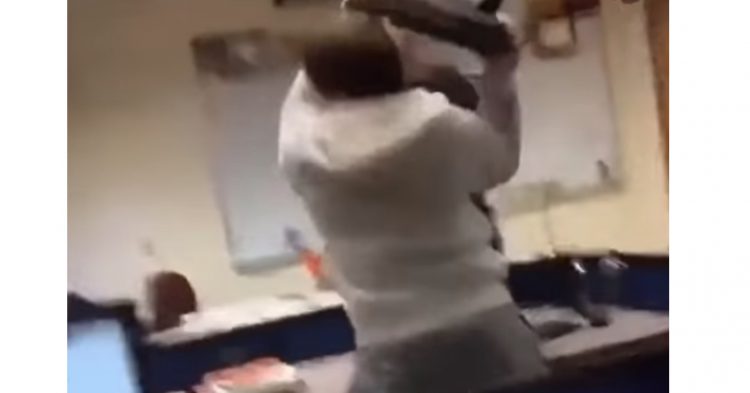 Some children just don’t know how to behave in public. But when these children grow up to become teenagers and then adults, their actions start to mean something. A toddler throwing a tantrum is one thing, and on a good day, it might even be cute. But when a teenager gets up and starts throwing a tantrum like a little baby, there is nothing cute about it.

That’s why when one teenager named Logan got angry in class and started throwing chairs and threatening violence at a school in the Hempfield School District, it was time he was taught a lesson. Unfortunately, Logan’s teacher was not able to get the boy to calm down – that’s why it takes another kid to get up and film the mayhem to expose the tantrum-throwing teen.

In the video, Logan stands up and starts throwing chairs. Then as he begins to walk out of the room, he punches a computer monitor to the ground in a fit of rage. The teacher, who is wearing a suit, does not know how to handle the violent student.

Then another boy, one in a black sweatshirt, approaches Logan from behind. He grabs the violent student in a bear hug from the rear and lifts him up. Then as Logan squeals, the student lifts him out of the classroom and out the door.

Meanwhile, the other students start laughing and guffawing at what they just watched happen in their class.

The clip was uploaded to the Weird Channel on YouTube and received tens of thousands of views rather quickly.

As you can see in the video, the teacher is paralyzed as Logan starts throwing his temper tantrum. The teenage boy is outraged and not behaved enough to handle school. Perhaps the teacher did not act because he knew the other students had their phones out and were recording Logan as he rampaged. If the teacher had done what the other student, Corby, did, he would not have been able to keep his job because the Hempfield School District would have punished him.

Dozens of viewers watched the video and shared comments including the following:

“His name is Logan, won’t say his last name for privacy reasons. He goes to Hempfield School District. He was in 10th grade at the filming of this video, pretty sure it was in entrepreneurship class. He was in my gym class in 9th grade, he would constantly cuss out sugar ray, he has anger issues. The kid that stopped him is Corby. Same grade. And he wasn’t punished for this if anyone was wondering.”

“You’re not yourself when you’re hungry. Eat a Snickers… or six.”

“I always wondered, what happens to people after they do stuff like that?”

“When the teacher takes your computer away.”

“When you have to wake up on Mondays.”

What do you think about this student’s classroom rampage?