Terrifying Moment A Family Notices The 9-Foot Snake Hiding In Their Bathroom. 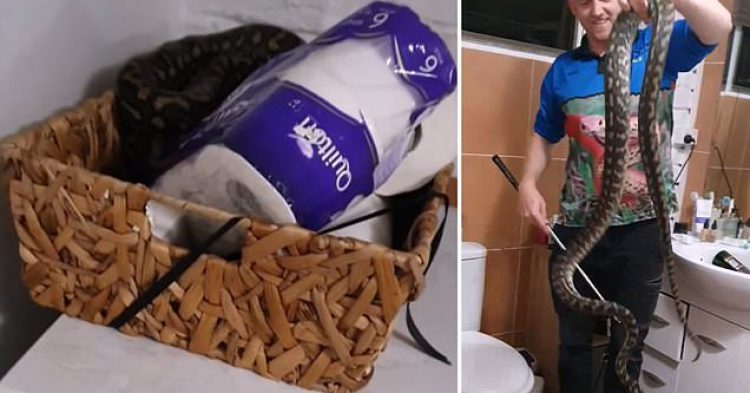 A family was having a lazy day at home in Queensland, Australia, when they suddenly realized they were not alone. A massive, nine-foot python was living inside their bathroom’s toilet paper stash and wasn’t planning on going anywhere without a fight. The family did the right thing and called the pest control experts at Sunshine Coast Snake Catchers, who sent out Stuart McKenzie to seize the python and remove it from the residential home.

The family had no idea that a snake had broken into their home and was living in their bathroom. However, everyone soon found out after the daughter came across the reptile. 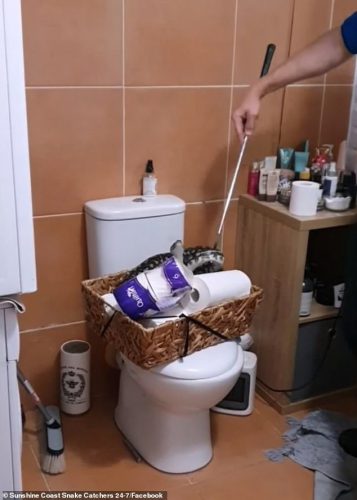 “I walked out, and my daughter walked in. She came out screaming,” the mother of the family said.

A clip of the snake capture was posted to social media. In the video, Stuart pulls down the basket of toilet paper, which wakes up the snake from its slumber.

“Look, there’s the tail. It looks like a decent size, and it’s actually in with all the toilet paper,” McKenzie said. He used a hook to grab the snake and then lowered the massive beast into a bag to safely remove it from the Aussie residence.

The python is estimated to be about three meters or more than nine feet long from its head to the tip of its tail. 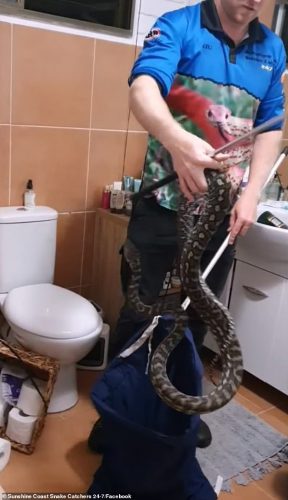 “It’s lucky you spotted him. Imagine you’re doing the washing, and he strikes at your face,” McKenzie told the Queensland family.

After McKenzie captured the home invader, he released the python into the bushland a distance away. His company, Sunshine Coast Snake Catchers, uploaded the content to their Facebook page and were swarmed with comments from people who were shocked that the snake had made itself so comfortable inside the home.

“How can anyone stand to live anywhere that snakes can get in their homes?” one user asked.

“Wow, that was a big one. It would give you a big fright,” a woman added.

Another person wrote, “Snake’s like ‘Dude I was sleeping, what do you want.’” 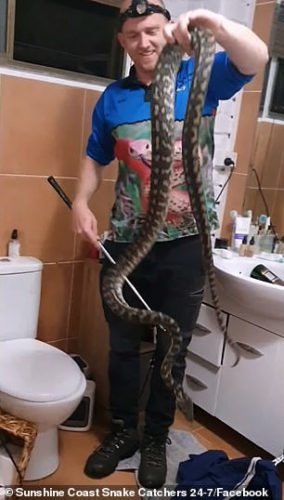 On Daily Mail, which ran a report about this python getting caught, dozens of other people shared their reactions. The following are some thoughts from readers across the globe.

“Would I have noticed it? It’s a 3m long bloody python. I’d have to be blind to miss it.

“As long as no one wiped their butt with the snake.”

“It’s a python, for God’s sake, and I can’t believe anyone living in Australia would think otherwise. Just cover it with a towel and take it outside or slide the basket into a bag.” 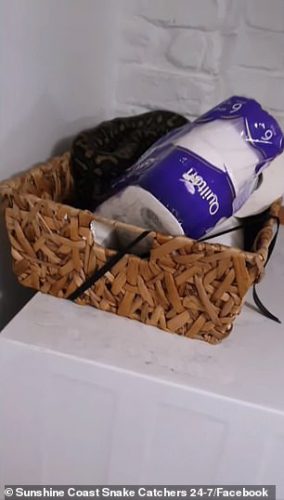 Some people wrote about how incidents like this make them want to avoid visiting Australia for the rest of their lives.

“Everything in Australia wants to kill you,” wrote one terrified reader.

“Between the snakes and the giant spiders, I don’t think I’d want to even VISIT Australia, let alone live there!”

What do you think about this large snake hiding in the bathroom?