While gas is available in the United States, drivers across the pond in Great Britain are stuck in a panic. As a gas shortage continues to plague residents of the United Kingdom, people are lining up at the pumps to collect as much gas as they can. Some “idiot” driver has even resorted to filling up old plastic water bottles with gasoline, which is very dangerous, and the entire thing was caught on video.

The gas shortage in Great Britain is so severe that people are not able to get to their jobs. Doctors and nurses are stuck at home because they simply do not have enough gas in their tanks to drive to their places of work. Lots of other Britons are stuck working from home because of the gas shortage. Schools are also being affected and may be forced to revert back to online learning while the country battles through the gas shortage crisis. 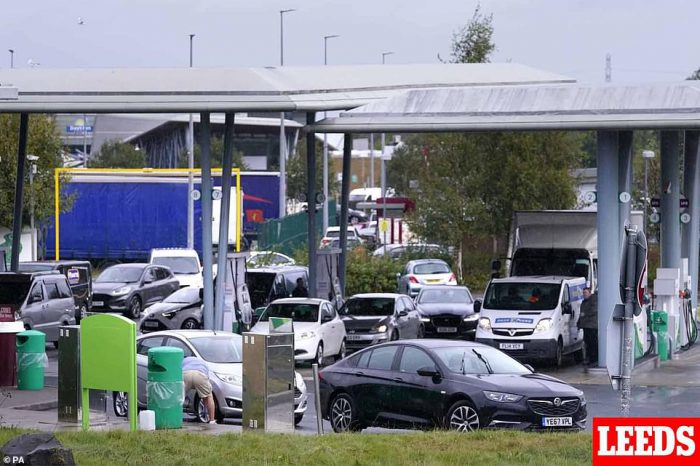 One driver, Gavin Rabbitt, was waiting to fill up his car’s gas tank at a station when he witnessed a woman filling up two 1.5 liter water bottles with fuel. Little did this woman know, but the bottle was not a safe way to transport gasoline and could be at risk of melting or exploding.

Over the weekend, the sale of jerrycans rose a staggering 1,656 percent, according to Halfords.

“‘I thought, ‘I can’t believe the stupidity of this woman.’ This is the kind of thing that causes the problem,” said Rabbitt, who is from Tonbridge, Kent. “People were filling up things they shouldn’t be filling up, and no one else can get the fuel because of other people’s stupidity. The queue was all the way down the slip road. We were queuing for about 20 to 30 minutes. She was all blasé and doing it right in front of me. It’s ludicrous.”

The gas shortage crisis in the United Kingdom is due to several factors, including a continuing shut-in of some North Sea oil platforms and an explosion at one refinery. The country has been forced to ration gasoline for motorists after poor weather conditions caused panic among energy traders who feared there would not be enough fuel available through National Grid’s pipelines into storage depots. In response, the government has deployed a £22 million diesel generator to provide emergency power for hospitals and other essential users in East Anglia.

British Prime Minister Boris Johnson also announced that he would be visiting Germany’s key oil hubs of Rotterdam and Antwerp this week to discuss ways to mitigate the crisis with European Union leaders.

The gas shortage is so severe that the government has urged people to stop using their dryers and dishwashers until further notice. In response, Britain’s biggest supermarket chain Tesco said it would be limiting fuel purchases at most of its gas stations because availability from suppliers is limited.

In an effort to help alleviate some of the pressure on the gas shortage, some people have opted to download an app that gives drivers a warning if prices at nearby petrol stations begin to rise.

Despite these efforts, some critics have said that the app has not had as big of an impact on petrol stations as it may have otherwise done due to a lack of fuel availability in many parts of the country. So far this week, about 60 percent of Tesco filling stations are without any unleaded fuel, and nearly all of Morrisons stations are dry.